This is so not anything academic

So if you want to know about the Blogfest I'd like to have at the AHA,
click here!


Now, for those of you who are feeling girly today, can I just say, I broke down and the annual Sexy man edition of People. Damn. And again, Damn. There are some pretty boys out there. Slightly scarey that the oldest ones are all about my age, though. And I don't get the Jude Law thing at all. But Colin Firth made it.
Posted by Another Damned Medievalist at 11:14 AM 5 comments


Via Rana, I am this kind of quiz-taker:

You may take a lot of quizzes, but really, it's no
big deal. Just harmless fun. Go on, take
another. One of them's bound to sort you into
Ravenclaw, if you just keep at it.


What Kind of Quiz Taker Are You?
brought to you by Quizilla

Otherwise, things are much the same in ADM-world. Still working on job apps and panicking. Piles of grading coming in, although I've got a new matrix I like. Morning class has me very worried. About half the class stopped coming last week on the day the paper was due. Haven't seen them since. I know I have a "no late papers" policy, but I also make it clear that I understand that shit happens and as long as they have a good excuse, we can talk about extensions. As far as I can tell, they don't read the syllabus anyway, so why is it they only seem to get that part. So anyway, I've had only 6 out of 19 students for the past three classes. It's an 8:30 class, so it's really depressing to only have a couple of people there. Papers were due in my afternoon class today (they all got an extension, because they also aren't behind and asked as a group if they could have another weekend), and about 5 people didn't show. Do they think I don't notice or that, if they don't show up, their papers are magically not late?

I so hate it when what I think are sensible rules end up forcing me to feel like a bad guy because the student don't have their shit together. Oh well. They didn't really seem to like Einhard much either, until they started to put it together with the stuff we've been talking about for the past couple of weeks -- Rome's successors, Germanic inheritance laws, Tacitus, Islam, rivalry between the Pope and the Patriarch -- then they seemed to think it wasn't a total waste of time. I despair. Really. It's like it doesn't occur to them that I have a method to my madness. It's not coincidence that we are going to be reading Roland next week. Argh. Job applications.


Posted by Another Damned Medievalist at 6:13 PM 0 comments

Feh. Spiderman. Not any of the superheroes I'd want to be. Buffy. I could get behind that. Ok, not really Buffy, 'cause she always falls for the trap, but a Slayer. Or Mrs. Peel. Or Batman.

Posted by Another Damned Medievalist at 1:02 PM 6 comments

Who's going to the AHA?

Going to the AHA?


Hey, all -- got way too much to do, but was wondering ... are any of my fellow bloggers planning on being at the AHA in January? If so, is there interest in meeting up in an honorable fashion that allows us to keep our pseudonymity if we desire?

Addendum: If people are interested, I can try to reserve pub/dim sum/some other space in advance. An ex-student actually opened a nice little pub near the Space Needle a while back, for example. A friend on Local Arrangements might also know what restaurants have been approached for discounts ...

Pseudonimity-wise, I was just thinking people could put a pseudonym name tag over their badges if they so wish?
Posted by Another Damned Medievalist at 6:48 PM 21 comments 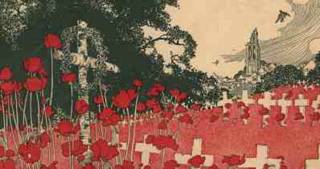 Photo found at http://www.usgennet.org/usa/mo/county/stlouis/ww1-music/flandersfield.htm. They also have a music link.
Posted by Another Damned Medievalist at 12:48 PM 0 comments


I think we should form a new party, because the Dems and Reps aren't really doing it for us any more. I think we should call it the American Values Party. Our party platform could have things like:

Just an idea. The party would also devote itself to fighting for a more moral society by encouraging family values, especially among those whose economic situations make it difficult, but building a better safety net and a tax and child-care credit that allows people to only work one job to support a family; to combat unwanted pregnancies by prevention (including, but not limited to, abstinence education in the schools, because it's a good option for a lot of people) -- and by offering more afterschool and pro-education options for K-12 because hell, a lot of it is dumbass kids who are bored and have low self-esteem. Better pay for entry-level jobs and greater restriction of working hours for teens, because really, they are not gaining in the long run by having disposable incomes, little sleep, and crappy grades. A return of the sex and violence watershed, and a reduction in commercials for that period. Protect our children and their values by not treating them as consumers. Greater access to parks and green areas, with hands-on nature experience for all K-12 kids. More arts education for our kids -- it makes them smarter and gives them creative outlets for their emotions. More PE -- it makes them healthy and they learn better.

Like I said -- just an idea. It's for the kids.
Posted by Another Damned Medievalist at 2:32 PM 9 comments

Not about the election

News not about the election

Just in case you're all election, all the time, I thought you might want a break. Let's hope that the next POTUS does something about this. Of course, we'd have to have people to send over in a multilateral coalition, but I think maybe even W could work that.
Posted by Another Damned Medievalist at 2:00 PM 3 comments