w00t! The latest Carnivalesque is up at Cranky Professor. It's got some of my favorite posts from the past couple of months, plus some stuff i hadn't seen before. And just in time for Thanksgiving break, for the Yanks, at least!
Posted by Another Damned Medievalist at 10:21 PM 1 comments

First, I agree -- it sucks for the workers. And layoffs would be really bad. But pretty much this WSJ article sums up some of the reasons for my objections. I don't like the anti-union subtext (it's the WSJ, what do you expect?), but I also have worked in three different union shops -- two for the twins 800-lb gorillas of education -- and have seen first-hand that union contracts can, in fact, reward incompetence and inefficiency, even while doing some of the very important things they do.

But anyway, back to my tax money and bailouts. I'm happy to see my taxes go to bailout any auto company or airline that is willing to restructure its management pay so that execs are not making hundreds of times more than the workers-- plus bonuses. And the workers? I'm sorry, but they average over $70 an hour. I get something more like $24. The top end for my next academic rank at SLAC is still only about half of what a UAW worker makes. Maybe they could also take a pay cut?

In the case of Detroit, I also don't want them having a share of my tax dollars unless they start making smaller, more fuel-efficient, relatively safe cars that come with more standard safety features. And I want the CAFE exemptions for vehicles clearly not meant for work (e.g., those not farm- and construction trucks -- can you say 'Escalade'?) got rid of. It's not just about the consumption in my books, but that I have a small car. If I get hit by an SUV, I'm screwed.


So yeah, bail out Detroit -- if they change their ways.


And the $700 billion? Again with the cuts to obscene management pay, thanks very much. My Congressional reps? I am nagging them.

ETA: Commenter Kristen points out this post that explains the $71 per hour. Apparently, it's not net -- it's hourly plus cost of benefits AND the costs of retiree benefits. The actual income average is a much more reasonable $60k. That makes things a bit different. $60k is still a very comfortable living wage, but it's not exactly exorbitant for skilled labour. Still shows that education is undervalued, but that, as my dad would say, is a horse of a different story.
Posted by Another Damned Medievalist at 7:06 AM 9 comments

Not Peter, not Michael, but Gordon. You know that scene in The Great Escape where Richard Attenborough and Gordon Jackson are about to board the bus, and Jackson is caught out by the question out of nowhere? auf Englisch? Well, that kind of happened to me. I was talking to the Provost at SLAC, and out of nowhere, in the middle of a different conversation, he pops out with, "You're Another Damned Medievalist, aren't you?" The Hell? Apparently, a couple of people thought he was ADM.

So I don't know how far the cat is out of the bag. With luck, folks who stumble on this will respect the pseudonymity and accept that I just happen to have a nom de blog. As New Kid pointed out to me in email the other day, it's not as if people with half a brain couldn't figure it out anyway. It's just that I think my colleagues at SLAC are not so into the whole blogosphere. Guess we'll see.

In other news, I am seriously tired. This semester needs to be over.
Posted by Another Damned Medievalist at 8:22 PM 5 comments 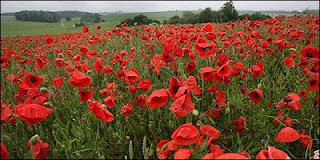 Posted by Another Damned Medievalist at 3:01 AM 0 comments

So, 30 papers in just over 48 hours. Exhausting. I did fall asleep a couple of times, less because of the papers than because of the lack of sleep. Got into town just in time to check into the hotel and get to the first talk, which was good. The speaker was slightly subversive in a way most people seemed to agree with, although I'm not sure many of us entirely bought the idea that Medieval Studies were not defensible in and of themselves. That was a question that came up several times during the conference, and it was interesting how so many of us (the historians, at least), from different generations, still had some similar ideas about what is important about what we do, and how we teach it.

The first actual panel had references to the Carolingians, which made me happy, even though I was not that convinced by one of the papers, although it had a really interesting premise. Still, one of the things about this conference, which I've never attended, is that it seems very collaborative. People were genuinely looking for advice and sharing, and that was nice. There was also a good panel on queens, one on masculinity at the courts of William Rufus and Henry I, and some nice number-crunching with charters, donations, and assarts.

The other really nice thing was that I saw lots of people I knew, and met some new folks who seemed really very cool. I got to have dinner with people I've known for close to a quarter of a century, and who are just as good to be with now as they were when I was an undergrad. And then I got to have a nice meal with people I've only known since I had actual academic jobs. More surprisingly, I saw people from grad school who I hadn't seen for 15 years, who seemed genuinely happy to see me. I know, this sounds really lame, but I've always thought of myself as someone who was on the outskirts of every social circle. So I find myself in these situations where I then worry about having not been as gracious as I could have been. Lately, my life has taken a couple of hits, and been such that I'm in that 'oh, they're just being nice' phase, and am probably a bit more awkward than I should be. So if you were one of those really nice people who tried to chat with me, and I seemed awkward or preoccupied or not as friendly as I should have been, please accept my apologies. Really, I was very glad to see you again.

Oh, except that one person I didn't know, but I knew who you were. You know, I am fairly sure that people who write nasty things about folks who go to Kalamazoo probably shouldn't go to Haskins or any other small conferences. Had I seen the name tag earlier than at the last get-together, I expect I'd have said something. Oh well, better not to have taken the opportunity to be snide, I guess.

But apart from that, I learned a lot of neat stuff, met some lovely people, and ended up totally wiped out, but energized. To me, that's a good conference.
Posted by Another Damned Medievalist at 9:40 PM 12 comments

For many, today was Remembrance Sunday, and in the US, Tuesday is Veterans' Day. Tomorrow It is also the anniversary of Armistice Day, and in my world, it's a day that should be remembered. So I take this opportunity to announce that I think you all should discourage anyone you know from buying Call of Duty: World at War.

I cannot really think of many things tackier than releasing a video game about war on a day when we should be commemorating how horrible war is.
Posted by Another Damned Medievalist at 6:19 PM 2 comments

I'm one of the judges of this year's Cliopatria awards, for the categories of 'Best Series of Posts' and 'Best Writer'. So if you have any nominations, please send them on, or leave a comment here. For more information, click the pic: 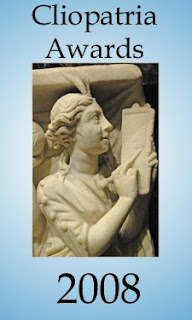 Posted by Another Damned Medievalist at 12:16 PM 1 comments

You know, I've been considering a diesel Jetta for my next car (by the time I can afford a new car, I expect that the US will have cleaner diesel).

But the Brooke Shields ads? They make me want to reconsider. They're just really lame.
Posted by Another Damned Medievalist at 9:32 AM 5 comments