In the meantime, I'm off to see what the President has to say. Also, I would like it on record that I am grateful for having grown up in a family where skin color and sexual preference were not ignored, but treating people differently because of it was Just Wrong. That was true even for my paternal grandparents, who had Views on such things, and used language that was terribly paternalistic at times, but who judged people on merit.
Posted by Another Damned Medievalist at 8:41 PM 0 comments

In case you were wondering

In case you were wondering

This blog has been delayed by the impending Semester of Doom OMG a little busy. Ironically, I was more prepared and balanced when I was blogging every day. Argh.

Lemme finish the damned syllabi, and I'll get back to you. In the meantime, here is a picture of a cat: 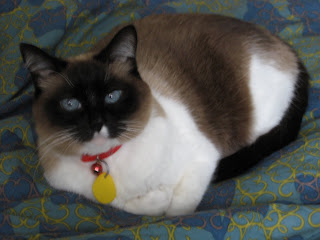 Posted by Another Damned Medievalist at 10:23 PM 3 comments


I saw Avatar last night. There's a lot to say about it. First, let me get the whole race thing out of the way. Not because it's unimportant -- it's not, and the critics are right and correct in their complaints. It is sort of Dances With Wolves or any other film where the white folks are evil colonialists and the blue folks are going to teach them something. And it is told through the POV of the Earth person, rather than the people who adopt him. And yeah, he saves them all. Even more importantly, though, is that this particular trope is included mindlessly in the service of another one, that of technology and modern values against pastoralism and valuing the natural world. I think that this is really the kernel of all the race issues people have noticed, but haven't mentioned. For me the real problem is that, in setting up the dichotomy of 'people in touch with nature' vs. 'people who have destroyed their world through greed and technology,' Cameron et al. have clearly not considered that race and questions of race will exist in the minds of the audience. TO me, that's something worse.

I'm not sure how I feel about this film, because there's a lot more to it, or maybe I'm just wanting to read more into it. At any rate, I'm going to go through it point by point, so if you don't want to read about the film, stop here.

First -- The Na'vi are just really cool looking. Giant blue stripey vaguely feline people. I can see how people complain about the whole Native American look, but honestly, I wasn't so much bothered with that, if only because their clothing and hair could have been just as much Native American, but from South America -- with a touch of Aborigine, really. So if there is a complaint here, it really should be that Cameron and his team picked and chose traits that seemed to go with people who live in a tropical rainforest, and then tweaked them a bit for the Na'vi who live on the plains and near the sea. In some ways, this was distracting, but it also made sense, in that a pastiche of different looks and traits pulled from a lifetime of reading National Geographic (that's what it felt like, at least) may have been as much about trying to extrapolate from what we know of Earth, and applying it to another planet. So in a way, you can reverse engineer this to a conversation where the filmmakers said to each other, "So we want pastoral people, hunter-gatherers, with an animistic belief system -- what can we take from Earth?"

Thus, what we learn of Na'vi custom is pretty much derivative/imitation: for example, the Na'vi thank their prey when they make a kill, and try to make the kills as clean as possible. They don't kill unless it's necessary, but they certainly aren't peaceful. There are snippets of dialogue that tell us that there have been wars between the different Na'vi people, and we know they will defend their territory. They can also tap into the spirit of their world, and to the spirits of all the dead. But when it comes down to it, we do have the eternal conflict between colonizers and colonized, and one of the real problems in this film is that that's really secondary to the plot. As far as I can tell, the filmmakers really weren't thinking about race or colonialism at all. The Na'vi are less a people, and more caricatures who serve as foils in a cautionary tale about not appreciating Nature.

Nature, or rather, the planet Pandora, is one of the stars of the film. The depictions of the planet are stunning, and really, I think it's worth seeing the film if only to see the world-building. It's amazing and gorgeous. We mostly see the rainforest parts of the planet. It's like, and not like, every rainforest we've ever seen. The plants are gorgeous and huge, and many of them phosphorescent and beautifully coloured. There are misty mpuntains that float. This was problematic for me. That much disbelief I have trouble suspending. Having said that, they are sooo cool! The animals are pretty cool -- there are canine-like hunters, hammer-headed-rhino-like giant critters, something vaguely huge and feline, and dragon-things. It's as if the filmmakers took examples from both dinosaurs and early mammals, and combined them to make something new. I think it's pretty effective. For me, though, the best, and most creative part of the animals is that all of them have appendages that can be joined to a set of feelers in the tails of the Na'vi. Joining appendages allows the animals to join thoughts. It's a bit of a jar to realize that only the Na'vi seem to be able to jack in and impose their will on others; in a planet where everything is clearly very interconnected, there is still a clear hierarchy, and the anthropoid critters are on top. The Dragon-things are pretty high up the chain, too, it seems. Unlike the six-legged horse-critters, who can bond temporarily with any rider, the dragon-things bond only with one Na'vi, and for life. Still, easier than on Pern, due to the lack of telepathy needed, harder 'cos they try to kill the person who wants to bond with them. (yeah, problems with number in that last sentence -- sue me!)

Enter into this pristine landscape People from Earth. It seems to be the same Earth that spawned the Alien films, an Earth where man has destroyed most of the environment through greed and warfare, and giant corporation(s?) with mercenary armies have led expansion further out into space. This particular group is searching for Unobtainium, an element that exists to take the piss. And the corporation will do anything for it. Enter our Avatars, Na'vi versions of humans who can link into their empty brains and drive the bodies from comfy (not if you're claustrophobic) couches that have some sort of embedded psi-links. I'm not even going to go into how bad the science here is, because it's a cool idea, after all. But there's also a huge plot hole. Our hero, Jake, is supposed to gain the trust of the Na'vi by joining their group, which he does, and trying to negotiate a peaceful move of their homes away from the larges source of snipe nests unobtainium. So he's there long enough to gain trust, live with them learn their ways, and become one of them ... and never bothers to tell them why the Earth folk are there??? Really? Really? You'd think if he cared, he might have warned them somewhere in the process.

But obviously, he can't, because that would ruin the whole Evil Corporate Interests Ruining Nature For Fun And Profit &tm theme. Because really, the crazed colonel in charge of the mercs wants to kill all the Na'vi, just because. He is that mean. He doesn't even care about the snipe unobtainium, just doing the soldier thing and killing blue cat-people and mocking the scientists.

And so we come to the end of the film where the bad guys look to be winning, until lo and behold, a plucky Latina pilot helps to rally the scientists to get Jake into his Avatar so that he can lead the Na'vi against his own kind. But will they trust him? And why should they listen? they have a war leader, after all. Ah, but Jake listened to his teacher and mate when she told him about how, in times of crisis, the Na'vi had been brought together by the rider of the super-dragon-thing...

Yeah, he dumps his dragon for a better model, rallies all the Na'vi, and prays to the planet to help. And the planet answers, but not till Cameron has killed off the plucky Latina and a bunch of Na'vi, not to mention the leader of the scientists (Sigourney Weaver, who is as good as ever). And then, in a terribly written ending, Jake tells us that "the aliens" were forced to leave Pandora, and the planet, or its deity, Eywa, uses its super-special "jack into the planet's energy" powers to transfer Jake's mind to his avatar's body forever and ever.

This is the one thing that I think could really have made an interesting film. The ability to truly change from one thing to another, to place a mind and soul into another body -- can that make a person that thing? One of the chief issues whenever we speak of race, and especially of racism and white allies, is that the white person can never truly know what it is like to be Other. Jake becomes Other, but in a world where there is no one but the Na'vi. Moreover, he never can lose the Earth marine that he was. The Na'vi have accepted him as one of them, but he didn't start out that way. There are so many interesting questions that the film could have asked, but didn't. But then really, should I have expected more?
Posted by Another Damned Medievalist at 10:47 PM 13 comments