Hello, all, and welcome to the 33rd edition of

. It's been a while since I've been able to really enjoy looking at blogs, so the theme for this Ancient/Medieval version is "some really cool stuff I wish I hadn't missed the first time 'round." With any luck, you may have missed some of this, too.

Even though it's not always considered history, I thought I'd start out with some prehistorical discoveries. First, and this is absolutely not historical, but I heard it on the news this morning and thought y'all might be equally amazed, here be dragons? Seriously, has anyone done any work on whether tales of dragons and other mythical creatures might have been discoveries by early fossil hunters?

To get to something a bit closer to our time period, Ancarett points us to prehistoric fashionistas. Meanwhile, both The Antiquarian's Attic and The Cranky Professor report on the discovery of a support village for Stonehenge. It might be Neolithic, but I don't think any ancient or medieval historian would debate that these big honking stone circles and the debates over their purpose and their builders haven't affected concepts of pre-Roman civilizations. Not to mention their importance to Asterix and Obelix! And, it appears, to Jeffrey Jerome Cohen.

Digs at more recent archæological sites are also in the news. Over at Memorabilia Antonina, Tony Keen recounts the possibilities, likely and imagined, of finding a Latin Library at Herculaneum. If you're interested in whether or not Alexander the Great was an alcoholic -- and many of my students are, for some reason -- World History Blog has been reading up on the possibility For those of you who are really interested, there's an even older article out there, I think either in The Lancet or in The New England Journal of Medicine that is an attempt at a forensic report based on what our ancient sources tell us about Alexander's life and death. IIRC, the result was that he was probably not poisoned.

I'd like to stay in chronological order, but really, this time I can't. You'll see why. Moving forward to the Middle Ages, though, there are some really interesting tidbits. My favourite all-around cool thing is this very cool video of a medieval church being moved, lock, stock, and barrel -- again, posted by Cranky Professor. And what's a church without saints? Or at least, saints' days? Over at Executed Today, we find that Saint Brice's Day in 1002 was not a particularly good day for Danes living in England. While you're there, you might also check out somewhat macabre tale of Frederick of Isenberg. Ick.

On a possibly less gory note (if we try to ignore those 4000 Saxons, at least), Magistra et Mater looks at the management secrets of the Carolingians. I don't completely agree, but it's good reading, and I'm very glad to have found her blog, because, well ... another blogging female Carolingianist!!!! I found her through Jonathan Jarrett over at A Corner of Tenth Century Europe. Jonathan also has a post up that is drawing some great comments. In the post, he addresses that perennial question: "what is our purpose?"

Apparently, most of our purpose these days is to talk about Beowulf. The movie, not the poem. My Long Distance Whatever and I saw it the other night. Take two early medievalists who are also sff fans and put them in front of a CGI-assisted film version of a poem they've both taught (and he's actually taught an entire course on the damned thing) from a historical perspective and see what happens. And no, X, we did not bore each other to death! Actually, we did both have to cover our eyes a couple of few times. Neither of us found too many nits to pick, possibly out of Gaiman-loyalty, possibly because for me, at least, the CGI really made it a bit alien to me, and I just felt the film was ... detached? from the poem. There's a lot to say, but really, I think some of our colleagues have done better jobs. First, The hype at In the Middle. Then,Dr. Virago asks, Hwaet the Hell? and later, tells us what she really thinks! Meanwhile, over at Got Medieval, LL Cool Carl waxes philosophic about Angelina Jolie's CGI breasts. No critique of modern views of the medieval could be complete without Matt Gabriele's review at Modern Medieval. And, of course, someone had to help with all the work -- I started collecting these when the film came out, but trust Scott Nokes to have beat me to the punch and posting. What I've missed, he's found. Enjoy!


As a final message, Ralph Luker over at Cliopatria would like me to remind you that The 2007 Cliopatria History Blog Awards are underway. Please check them out and nominate/vote for your faves.


Update: Links now fixed.
Posted by Another Damned Medievalist at 6:09 AM 12 comments

I hope it will be up by this evening, PST, but there's a chance it won't be up till early Wednesday, because I'm about to lose my internet connection!
Posted by Another Damned Medievalist at 3:22 AM 0 comments

So I called X on my way to Fabulous European Capital to say hi and goodbye in case the plane crashed. And he said he'd found this blog and was reading it! So everybody, meet X. X, meet everybody. I hope you like each other. And you know, I guess it says something about the way I feel about him even now, that he's the person I wanted to talk to, just in case something happened. We weren't the greatest of partners, but I think we've managed to be pretty good friends.
Posted by Another Damned Medievalist at 5:31 AM 1 comments

Aaaaargh!! I am not just Another Damned Medievalist, but I'm another so screwed medievalist! I had these grand plans to host a Carnivalesque next week, because I was going to have cleared my desk of all work except for editing LDW's book, and was going to try to enjoy my Thanksgiving week with him in Fantastic European Capital. My desk is so not cleared! I feel like I haven't read blogs in forever. So ... if you can think of any particularly good Ancient/Medieval posts from the last two months, please feel free to send me (or post) links. All I can say right now is that there will be a Beowulf section -- with a review if it's opened in Fabulous European Capital.
Posted by Another Damned Medievalist at 7:37 AM 0 comments

We remember the day

We remember the day, but we seem to have forgotten why. 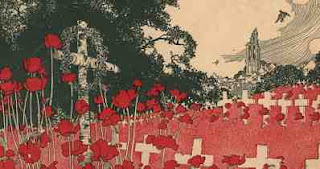 Posted by Another Damned Medievalist at 7:17 AM 3 comments

History Carnival 58 is up at Aardvarchaeology.

Sorry for the late notice, but I am in grading jail, had a mild case of 'flu, and it's advising week.
Posted by Another Damned Medievalist at 6:58 AM 1 comments

In this post, I talked about students not doing the reading and how I didn't want to infantalize my classes by giving quizzes. I got lots of great suggestions that made me do a little re-thinking, and in the last two classes, I gave quizzes. I'd actually warned the first class -- the teeth-pulling one -- that there would be a quiz. Despite this, the results were largely pathetic. But the results of the class period were much better. After the students completed the quiz, I collected it, looked all of the quizzes over, and returned them to the students after getting an idea of where they were. Then we arranged our chairs for a discussion and went over the possible answers (it was an amazingly open quiz -- name five major things that happened in what had been the Roman Empire between that emperor who legalized Christianity and the guy who won the battle of Lechfeld, for example). Most of them had little to go on from what was written down, but if one person knew something, someone else could add to it, and then someone else could come up with another related thing, and so on. So I was able to demonstrate to them that they knew more than they'd thought, AND that they all needed to study more.

The second class erupted in protest. And then a couple of them said, "but we're usually prepared -- you should make it a group quiz!" So I told them that, as long as we could get really good answers to all the questions, we could do that. So we got in a group, and they were all over it. And they ribbed each other about wrongish answers ("Dude! That's like a hundred years too late! What are you thinking??"). It was really fun.

Best thing is that I managed to review a ton of stuff I'd been trying to get to, clarified a lot of things people were having trouble with, and tied it up with a big overview ribbon! I think I may start doing this more often, and earlier.
Posted by Another Damned Medievalist at 2:12 PM 4 comments

What will be on the final?

What will be on the final?

If I think it's important, there's a good chance it will be on the final. kthxbai.
Posted by Another Damned Medievalist at 11:22 AM 3 comments